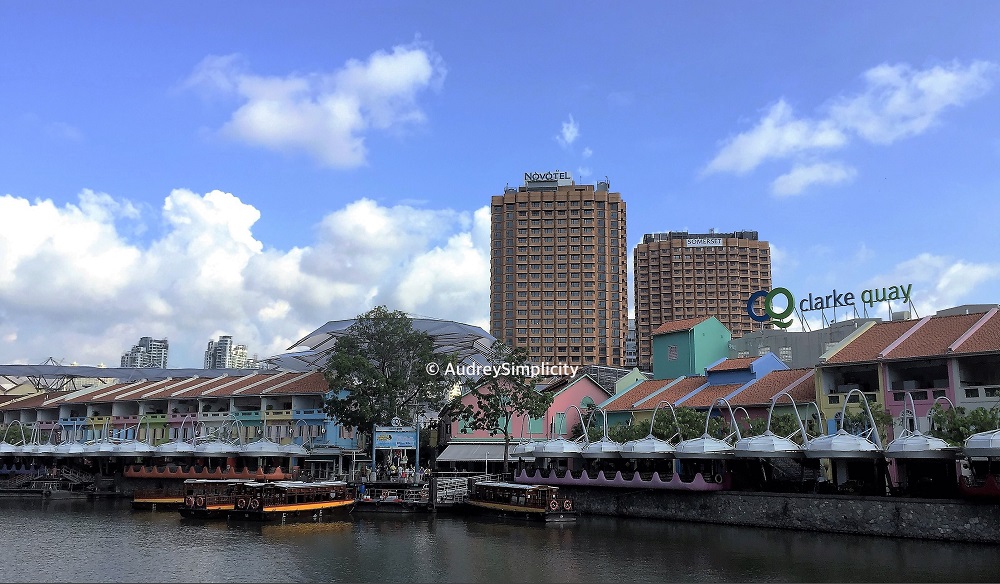 Every weekend, I will go for my morning walk by the Singapore River. Along the way, I will stop to take pictures of the architectures and people, especially the colourful and cheerful looking architectures at Clarke Quay.

Clarke Quay is located near the mouth of the Singapore River, the centre of trade since modern Singapore was founded in 1819. Clarke Quay was named after Sir Andrew Clarke, Singapore’s second Governor and Governor of the Straits Settlements from 1873 to 1875.

Clarke Quay played a key role in positioning Singapore as the main port for the Malay states of Perak, Selangor and Sungei Ujong. During the colonial era, barge lighters would transport goods upstream from Boat Quay, the commercial centre, to warehouses at Clarke Quay.

At the height of its prosperity, dozens of bumboats jostled for mooring space beside Clarke Quay.  The Singapore River became very polluted. The government of Singapore decided to relocate cargo services to a new modern facility in Pasir Panjang and cleaned up the Singapore River and its environment from 1977 to 1987.

Today, Clarke Quay is still buzzing with life and activities, a delightful mix of modern and traditional. Due to the historical value of Clarke Quay, new buildings are mandated to complement the historical character of the area with certain old buildings restored.

The waterfront godowns now play host to a colourful kaleidoscope of restaurants, wine bars and entertainment spots. When the sun goes down, you don’t have to look far to discover some of the city’s trendiest nightspots.

Linking Clarke Quay to Swissôtel Merchant Court is the Read Bridge, a beam-structured bridge, named after William Henry Macleod Read. Read was a prominent resident in Singapore between 1841 and 1887 and Consul for the Netherlands between 1857 and 1885. The bridge was built in 1881 and completed in 1889.

From the Read Bridge, we can have a nice view of Singapore River and Clarke Quay. In the evening, the Bridge is a place to enjoy the evening breeze.

Hope you enjoy looking at the colourful and cheerful architectures like I do.

Thank you for stopping by and happy Living for Experiences!

Copyright © Living for Experiences 2016-2019. All rights reserved. All content in Living for Experiences Blog belong to Audrey Wan, including images and videos, unless clearly marked otherwise. If you would like to reuse any of the content, images and videos from this site, please get explicit approval from the owner and with correct referral to the source and authors.