Shalom! Continuing our journey in Israel, if you missed my earlier posts, check out  Shalom! Israel

We left Galilee and started our journey to the Dead Sea.  Our first stop at Dead Sea was to Qumran National Park.  Qumran is located west of the Kaliah-Sedom road on the north-western shore of the Dead Sea.  It had a Jewish population as far back as the 8th century BC.

Quarum is where the Dead Sea Scrolls, written by the Essenes, were found.  In the summer of 1947, a young shepherd of the Bedouin tribe of the Taamira was pasturing his flocks near the northwestern shore of the Dead Sea.  While looking for a goat that had wandered off into the cliffs, he came across a rock crevice.  The shepherd, together with his friend, crawled inside and saw large whole jars standing on the floor.  Inside the jars, they found folded pieces of leather, some of which were wrapped in cloth.

The Essenes, a break-away sect, lived and studied Qumran for two centuries from the end of the Hashmonean period, through the great revolt of the Jews against the Romans. The Essenes were ascetics who had paid great attention to ritual bathing and purity.  They lived a communal life in a settlement with assembly halls, a central dining room, in which ceremonial meals were eaten, a kitchen, ritual baths, a laundry room, a watch tower, a stable and a pottery workshop.  The Scriptorium (writing room) with its desks and inkstands, where the Essenes scribes probably wrote most of the scrolls.  The desks also had recipients for water, used by the scribe to purify his fingers every time he came across the word YHWH (God) in the text he was copying.  Once finished, the scrolls were sealed, individually wrapped in linen wrappings and put inside clay amphoras. 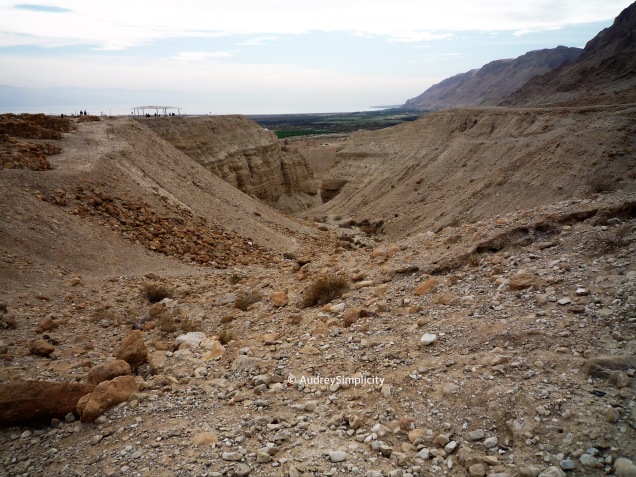 Ritual Bath – As mentioned earlier, Essenes were ascetics who were strict in their observance of the laws of ritual purity and maintained seven ritual baths, located mostly in the vicinity of the refectory.  The picture below is where the ritual baths were conducted.  The water would filled the lower tier where the members of the sects would observe the law of ritual bath.

The Refectory  – The members of the sect assembled in this room for communal meals and doctrinal deliberations.

“They shall eat in common and bless in common…and when the table has been prepared for eating and the new wine for drinking the priest shall be the first to stretch out his hand to bless the first provie of the break [or new wine}.” – Community Rule VI, 2-5

Pottery Storeroom – The things that were found in this area were either destroyed by forces of nature like earthquake or by people like the Roman soldiers.

Thank you for stopping by

Wishing all a blessed Friday 😃.
#quote #quoteoftheday #wordsofwisdom #wordstoliveby
Speak graciously.
Consolidated view of my low carb meal for the week by Nutrition Kitchen.
#bibleverse #biblejournaling #verseoftheday #romans
As I shared in my earlier post, today is cheat day, I had a sumptuous lunch with my colleagues. Food is good and the company is great. 😋.
Today is my cheat day. Had a sumptuous lunch with colleagues and simple dinner from nutrition kitchen. Will take a break next week as I didn’t manage to submit my order to nutrition kitchen in time. Hopefully I will not gain back the weight I lost 😅.
#bible #bibleverse #biblejournaling #verseoftheday #verse
Today’s Low carb lunch and dinner. I think I am really feeling bored with the food. They taste about the same.